Portugal left a mark not only in world history. We all know about the discovery of new lands. But now Portugal is not hiding in the shade. Some records were set by Portugal in the Guinness Book of Records. Some of them are funny and some are a real achievement.
Do you want to know which ones? Then this article is for you. 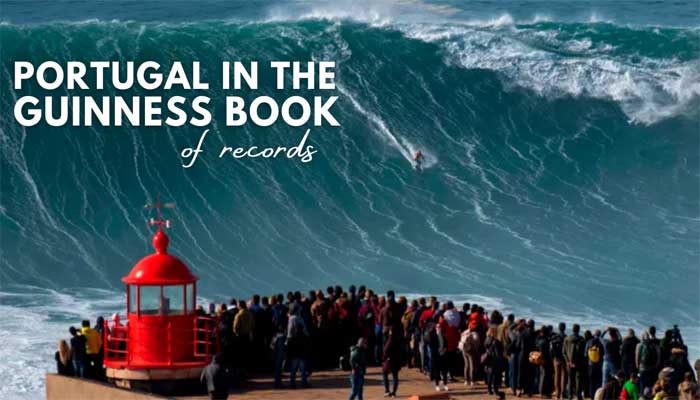 So, the record was set in 2012 in the Portuguese city of Ferreira do Zêzere.

Amateur cooks prepared the largest omelet in the world. It happened at a city fair, which lasted three days. 150 people participated in the preparation. Volunteers worked in several shifts.

To prepare it took many ingredients: 145 thousand eggs, 100 kilograms of butter and more than 400 kilograms of olive oil. However, not only the quantity of ingredients is surprising, but also the size of the pan for frying it. For your information, its weight was 4 tons and a diameter of 10 meters.

The final weight of the omelet was more than six tons!

Besides, this omelet broke the record that was set in Turkey in 2010. The weight of the Turkish omelet was only 4.5 tons.

The Most Expensive Candy

Continuing the topic of edible records, we present to your attention another record.

In 2018, the most expensive candy in the world was created in Portugal by Daniel Gomes. The candy has the shape of a rhombus.

By the way, the candy presented at the exhibition was guarded by two men in uniform. Why guard the candy? Obviously! Its cost is estimated at 7,728 euros! Confectioner Daniel Gomes explained the high cost of candy. For its preparation, he used very expensive ingredients. For example, the filling consists of saffron threads, pieces of white truffle, vanilla from Madagascar and golden flakes. As well as covered with edible gold!

Candy was released in limited quantities – only 1,000 pieces. Were there sponsors of such an edible experiment?

In 2013, the largest photo album in the world appeared in Portugal. It contains 10 thousand photographs taken by locals in Portugal. In each region of the country, were taken 768 photographs.

Basically, the photographs reflected the features, beauty and details of different regions of Portugal, that sometimes were remained invisible for tourists.

The height of this photo album is 4.5 meters and the width is 8 meters. A giant photo album traveled through Portugal and ended its journey in Lisbon.

Appositely, the photo album did not stop to exist. Its electronic version is uploaded to the Internet. How long will it take to see all photos?

In 2003, the largest pocket knife was made in Portugal. It was designed by Telmo Cadavez. He has been collecting knives for a long time.

Portuguese Virgílio Raúl made a huge knife by hands. Of course, such large knife making machines do not exist yet.

The largest pocket knife has a length of 3.9 meters and weighs 122 kg.

Certainly, this record is funny, but absolutely useless.

The Largest Number of Santa Claus

People in Santa costumes made a parade around the city. 17,400 of Santa Clauses were going to come to the parade. Unfortunately, some were prevented by bad weather.

Despite the bad weather, thousands of people participated in the parade. Among them were also children and women. They all walked along the streets of the city. Santas in red and white robes and faux white beards sang songs and danced until the evening.

Furthermore, every Santa Claus who came to the parade donated 1 euro for gifts to the needy children of the city.

The Largest Number of Drummers

Summer in 2014 in Portugal in the city of Aveiro, a world music record was set.

That day, the drummers came to Aveiro from their cities to celebrate – Rhythm Day. Among the participants were amateurs and professionals. Besides, the smallest drummers were only 6 years old. Famous drummers entertained the audience, improvising before the start of the experiment.

Initially, all the musicians stood. Then the first 5 people sat down. The first drummer began to play, then the second, then the third and so on. In total, 74 drummers were beating at the same time.

Fortunately, the city was not destroyed by resonance, and the audience and musicians were not deaf. Everything went well! And Portugal took the next line in the Guinness Book of Records!

It’s time to move on to sports records. So, a resident of Portugal, Maria da Conceição, ran a series of seven marathons. Marathons were held on seven continents, including the subcontinents of North America and Antarctica.

Maria started on the 8th of February in Australia, followed to the United Arab Emirates, France, Tunisia, the United States of America and Chile. The race in Antarctica had to be postponed for four days, due to bad weather conditions, so the challenge was completed in 11 days. The previous record was 48 days.

Thereby, Maria set a record called 777. She ran 7 marathons in 7 days on 7 continents.

In Portugal, on the shores of the Atlantic Ocean there is a small fishing town. It was founded in the 16th century. However, the city is known not for fishing. Due to the special topography of the bottom and the huge canyon, the largest waves in the world are formed there.

Of course, waves are larger in the open ocean than in Nazaré. But huge waves in Nazaré can be seen from the coast. Surfers from all over the world come to the city of Nazaré to conquer their biggest wave. Tourists come to see this natural wonder and record new records in photographs.

Consequently, the beach in Nazaré appears in the Guinness Book of Records as the place where the highest wave was conquered.

However, we know that this is not the limit. From November to February, sometimes in Nazaré there are waves higher.

If someone will conquer such a big wave – is a question of time. But, if someone does it, then the record will be set in Nazaré again.

In the modern world there are no people who didn’t not hear the name of Cristiano Ronaldo. About his records, we can talk endlessly. It’s obvious that our article cannot be infinite. Therefore, we will only list the lines that he took in the Guinness Book of Records.

The record number of Champions League matches in a row in which he scored a goal. No one has scored goals so steadily. In the season of 2017-2018 for Real Madrid, he scored the goals in 11 games in a row.

We suspect that Cristiano Ronaldo came to us from another planet, or from the future. It is impossible to be so successful in sport, to be so sensual man and father of 4 children. At the same time, he engages in charity work.

Portugal is a small country. However, there live purposeful and inventive people. Who knows what records we should expect in the future? Without a doubt, as soon as something happens in this area and Portugal again falls into the Guinness Book of Records, we will let you know!