Phrasal verbs are verbs that change their meaning depending on the preposition that follows them. On the one hand, phrasal verbs seem difficult to remember. It is easy to get confused in prepositions, and it would be better for each meaning to have its own separate word. On the other hand, we need to operate with the same verb and prepositions that we already know, this is convenient. In any case, what is, is. 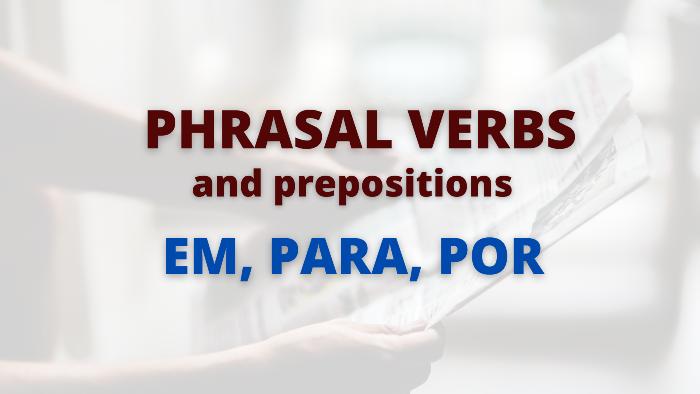 Fortunately, there are only three basic phrasal verbs in Portuguese. “Basic” means having the greatest number of variations. Hence, there is more confusion. Let’s not delay getting to know them and learn these verbs: dar (to give), ficar (to be), passar (to conduct).

Let’s start with the fact that the original meaning of the verb ”dar” (to give) has nothing to do with the meanings of its combinations with different prepositions. You will see for yourself. However, the combinations themselves have hints that will help you remember their meaning.

Decidimos divorciar-nos, porque demos em pessoas indiferentes uma à outra. (We decided to divorce because we found people indifferent to each other.)

The original meaning of the verb “ficar” is to be, to stay. Most often we find a combination of this verb with the preposition “em“, when an indication of a place is added to the main meaning:

Não vou contigo ao cinema. Hoje quero ficar em casa. (I won’t go to the cinema with you. Today I want to stay at home.)

The simplest option, however, we had to describe it so that you have no doubts – “ficar em” has only one meaning.

The verb “passar” always means some kind of movement. This may be the movement of a person, objects, hand action, and so on. It is the original meaning of this verb that is embedded in the meanings of its phrasal derivatives, and prepositions only narrow the number of variations.

Perhaps the phrasal verb “passar-se” is the one we encounter most often. “O que se passa?” (What is happening?) – we hear in the cinema, in the company, on the street. Of course, if you can’t remember this expression, then you can use its synonyms. For example, such as “acontecer” or “ocorrer“, which mean “occur”. In this case, the preposition “em” only helps to indicate the place.

This phrasal verb has two meanings. One describes the location of the object, and the other describes its comparative properties. Namely:

Esta chave não dá para abrir a caixa com jóias. (This key is not suitable for opening a jewelry box.)

Se não fazes bem os teus exames, se calhar não dás para engenheira. (If you don’t do well in your exams, it might not be your calling to be an engineer.)

In any case, you can orient yourself like this: usually the preposition “para” indicates the direction of movement. Together with the verb “dar”, this preposition also indicates a direction: either towards another object, or towards some skill.

Let us return to the fact that the preposition “para” indicates the direction or has the meaning “for“. Both options work for us. The phrasal verb “ficar para” is translated as: a) to get to someone, b) to postpone, postpone. In both cases, the object passes to another object or to the future.

A Helena ganhou, mas a cerimónia de premiação ficará para amanhã. (Elena won, but the award ceremony will be postponed until tomorrow.)

Not all cases have a logical explanation. For example, “dar por” means “notice“. Just remember this phrasal verb.

A synonym for “dar por” is the verb “reparar“.

This is perhaps the strangest phrasal verb that has two completely opposite meanings: to finish and not to finish. Its meaning can only be understood from the context.

Temos de ficar por aqui, apesar de tudo ficar por fazer. (We should finish now, even though we haven’t done anything yet.)

Instead of “ficar por” one can easily use “parar” (stop), “acabar” (finish) in the meaning of “finish”, for the meaning “not finish” – “não acabado“, for example.

One of the meanings of this phrasal verb has long been known to us from the topic of comparing the prepositions “por” and “para“. Then we learned that the preposition “para” when moving leads us to the end point, and the preposition “por” makes some place cross, pass along or past.

Quando passares por Lisboa, vem visitar-nos. (When you are passing through Lisbon, visit us.)

The second meaning has no logical explanation and is translated as “to be like, to seem”.Da maneira como fala até passa por advogado. (With the manner in which he speaks, he looks like a lawyer).

Phrasal verbs are not the most important topic in Portuguese. You can always find a good replacement and not distort the meaning of the phrase. However, our communication in Portuguese means not only expressing our own thoughts, but also listening to the opinions of others, native speakers who can use phrasal verbs whenever they want. So, in any case, it is useful to know their existence.