One of the things that everyone loves in Portugal is the food. However, sometimes it can be hard to order local dishes. In order to help people in this task, we have written this article. Today you will know how to choose typical Portuguese food when you are in a restaurant. 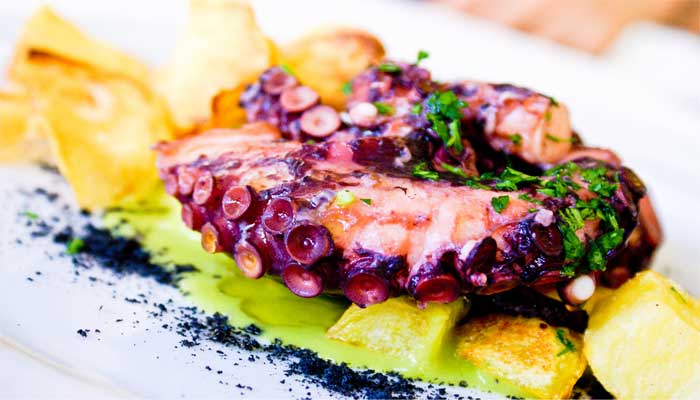 First of all, what is the relationship between tourism and food? The answer is pretty simple: in general, in more touristic places is more difficult to find real Portuguese dishes. We don’t know exactly why it happens, but probably there are two reasons. First, because there is the idea that foreigners prefer more simple food and it is better do not take risks. Second, because it’s easier to prepare something like grilled fish with vegetables or meat with potatoes. Usually fish is very fresh in Portugal, meat is good as well, consequently no one will complain.

Because of that we have created for you a 100% national menu. We considered a dish as being 100% Portuguese not only when there is common ingredients used in national kitchen, but when it is prepared following a Portuguese receipt.

We have divided this menu into soups, fish, meat and desserts. Despite our kitchen is much more complete, we decided to focus on the most important. Although, this menu could include appetizers, salads, a lot of seafood and drinks.

In addition, we took into account three rules. First, we chose dishes that people eat regularly (not delicacies or with expensive ingredients). Second, we excluded “strange” dishes, which usually foreigners don’t like. We did it because the goal is to give you a useful menu. Finally, we tried to vary the ingredients.

Dear client, here is the menu:

The main ingredients of Caldo Verde are collard greens, potatoes, onion and “chouriço” (a type of pork sausage). It has this name (literally “green broth”) because of collard greens.

It is a heavy soup with bacon, pork sausage, beans, potatoes, and many others. The name (“stone soup”) derives from the folk story where a man convinces people to help him to do a soup, starting by a stone. Many other European countries have a similar story, so they have the same concept, just with other products (local products). It is a winter soup and it’s enough satisfying for a lunch or dinner.

With codfish you don’t need worry about. No matter which of the 365 receipts of codfish you chose, it will be typical and tasty. In Portugal people don’t eat it fresh. It is dried and salted after capture, and desalted before preparation. This way it is always fresh not being fresh. About the codfish there are two interesting facts. First, it is always an imported product. Second, it fed the Portuguese sailor centuries ago, during the discovery times, thanks to its conservation capacity. It’s not by accident that it is sometimes called “fiel amigo” (“faithful friend”).

Basically it is potatoes, tomatoes, onion and different sorts of fish in a pan. Usually it should have 8-10 ten different types of fish, but it can have more. Some of these fishes we don’t find so frequently in restaurants so, if you are a fish lover, this will be perfect for you.

Probably it will not be love at first sight, but for sure it will not disappoint you. For many foreigners eat octopus (“polvo”) looks weird and disgusting, but once they tried, they always want to repeat. We recommend octopus “à lagareiro” because this one is really good, with a garnish called “migas”. By the way, every time you see ingredient + “à” + something, it means a way to cook it.

Sardines are popular among locals, foreigners and tourists. Maybe because it is eaten in some holidays. However, they are not always good. The best months to eat them are those months which the names (in Portuguese language) have not the letter “R”. Those months are May (maio), June (junho), July (julho) and August (agosto).

It’s also important to remind that the day of the week we don’t suggest to eat fish is the Monday! Typically the fishermen don’t go fish on Sunday so the most probably it’s to eat not fresh Portuguese fish!

This was the first part of “How to order (real) Portuguese food”. Soon we will publish the second and last part, where we will talk about meat and desserts and, as usual, many other things.

Until then, if you want to visit us, you can do it in Caldas da Rainha and Matosinhos.