Today we will finish our journey through the Portuguese menu. You will learn how to order meat dishes and deserts. If you missed the first part, you can take a look here. Once again we will suggest a 100% Portuguese menu with dishes that usually foreigners like (with a couple of exceptions). 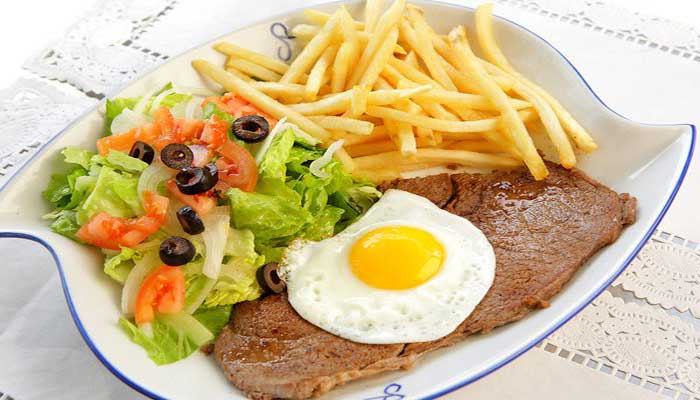 Although in many restaurants beef and pork are the most common, in our kitchen there are receipts for many kinds of meat. We eat poultry and other birds (in first place chicken and after turkey and duck), rabbit, lamb, goatling, wild boar and some more.

It’s a beef with a fried egg on the top and French fries, rice and salad. It is a simple and cheap dish, but everyone likes. The secret is the way the beef is prepared.

It’s pork with potatoes and shellfish (clams). It can look strange, because we have meat and fish in the same receipt, but the result is good. As we told in the part 1, when there is “ingredient + à + word”, it means a way to prepare. In this case, “alentejana” means from “Alentejo”, a region in the south of Portugal.

It is basically chicken prepared in curry sauce and usually it’s served with rice. Curry is an imported spice and this dish looks much more Indian than Portuguese. Although, it is common in Portugal and when is properly prepared it is really tasty.

There is another way to cook chicken that foreigners like in Portugal: it’s grilled chicken (“frango assado”). We didn’t include it in our “menu”, because it’s not a Portuguese receipt. Probably the sauce used in Portugal is different and for that reason foreigners enjoy it.

Portugal is a country of sweet teeth and if you’re also a sweet tooth you will feel great here. The variety is huge, but here we took into account only the ones considered as “deserts”. In other words, these sweets are eaten after a meal and not between meals (in general).

We don’t include many eggs in our dishes, but there is an exception: the sweets. The most popular sweets in Portugal have a big amount of eggs. Usually foreigners don’t like this fact (except the bigger sweet teeth).

You just need to translate the name “pudim de ovos” to understand what is it: egg pudding. This desert has a lot of eggs and caramel on the top. It’s a fact that most of foreigners don’t appreciate it and we said that in our menu we will include only what foreigners usually like. However, this is a desert that we can find in every Portuguese restaurant so it’s good to know what it is. Maybe you will like, just be prepared…

This desert has eggs as well, but here the main ingredient is condensed milk. Although, when it is prepared, you don’t feel the eggs or the condensed milk, but a desert with a great texture and flavor.

Once upon a time a woman had guests and tried to prepare a new recipe with two of the limited ingredients she had: eggs and a can of condensed milk. Despite she had a great success, she realized it wasn’t enough for all guest, so she gave it this name. Most of the guest didn’t want to try, but those who tried were really happy.

The chocolate mousse is not a Portuguese receipt but you can find it in almost every Portuguese restaurant. Chocolate isn’t typically used in Portuguese kitchen. Although, it’s a product that almost everyone loves. So if you are a chocolate lover and don’t know which desert you should choose and this will be a good option.

Usually foreigners like the fish, because in Portugal it uses to be very fresh all year. They are also satisfied with the quality of fruits and vegetables. The wine is very appreciated as well, because of its large variety, quality and low price. In general, the food is relatively cheap here, not only in supermarket, but also in restaurants, which is positive.

The way food is prepared it’s also well appreciated. Although, some dishes could be too heavy for someone not used to them. We  also eat things that could be strange and even disgusting for a foreigner. For example, we eat the full pig (included hands and ears) and things like snails.

As we told before, our confectionery uses a lot of eggs and it could be strange as well. Nevertheless, because the variety is big, a foreigner always finds what he really likes.

We hope that this second part was useful and interesting for you.

If you’d like to read an article about some specific subject, please let us know your thoughts.

Finally, remember that you can visit us in Caldas da Rainha and Matosinhos.