Today our subject will be a relatively easy verbal tense which often students avoid to use. We’ve notice that frequently they struggle with much more complex forms when they can use this one. So, in this article we will simplify and try to encourage you to use this form more often. 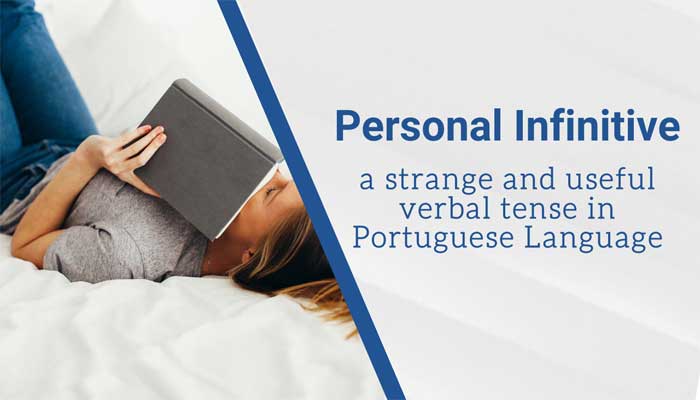 Probably if you’re a beginner you didn’t hear yet about it. Although, if you’re learning Portuguese for a while, you must have heard already.

The Personal Infinitive (Infinitivo Pessoal in Portuguese language) is a conjugated form of the Impersonal Infinitive (the form usually found in dictionary). In other words, it’s the Infinitive associated with a specific person. Consequently, we use it in the same cases we use the

Impersonal Infinitive, but when the person should be mentioned on the verb.
Let’s see how to form and when to use it.

It’s pretty easy to form this tense: it’s only necessary to add some endings to the (Impersonal) Infinitive form. Moreover, there are NO irregular verbs here. ALL verbs are regular!

As you can see, it’s pretty easy.

When to use it

Firstly, let’s see the cases when we don’t have to conjugate a verb, it means, when we must use the Impersonal Infinitive. It will help in the next step.

a) After a conjugated verb

Vou aprender português. (I will learn Portuguese)
Quero visitar a tua cidade. (I want to visit your city)
Gosto de estudar nesta escola. (I like to study at this school)

This happens in many languages, so usually is easier to understand.

In this specific form, the verb always appears in the Infinitive.

When to use the Personal Infinitive

You just need to take into account that we use the Personal Infinitive in the same cases as the Impersonal, but when is necessary to refer the person. Let’s see some examples and make comparisons.

In the first sentence there is not a specific person but in the second one does (“you”). Notice, in some cases it is necessary to refer the person (with a name or pronoun) in order to avoid misunderstood:

3) Use it after a preposition

Often students don’t notice, but after a preposition we always use the Infinitive. In this cases, often we must use the Personal Infinitive, in other cases is optional.

Estamos em Portugal para aprender português. (We are in Portugal to learn Portuguese)

In this sentence there is always the same subject (“we”: we are, we learn), so it’s not mandatory to use this form (“aprendermos”) here. Usually native speakers prefer do not use it and simply say “aprender”. However, in the following form it is mandatory, because there are different subjects:

Why it is useful

Recently we publish an article where we talked about the most used verbal tenses in Portuguese. In this article we’ve included two forms of

Considering the “rich” verbal system, if we say “yes” it would be too much optimistic and far away from reality. However, as usually we do, we have a good new. Additionally, if you know the Personal Infinitive, you’ll be available to express yourself correctly in 99% of the cases.

One good example is the adapted books. We’ve already talked about it in a previous article and Caravela School has adapted some books.

One of the adaptation steps consists in replace less frequent words, expressions, verbal tenses and structures with more frequent ones in everyday life. For example, in our adapted book for the level A2 “O Principezinho” (The Little Prince), we’ve used only five verbal tenses.

They were two past tenses, Present, Infinitive (Personal and Impersonal) and one more (Pretérito Mais-que-Perfeito Composto do Indicativo). The last one appears only three times in the book. Nevertheless, all book is written in contemporary language and even a native speaker couldn’t notice the adaptation.

Once again, we’ve tried to simplify many things regarding to the Portuguese language. We believe that the simplification is the way to speak more correctly and to start to do it quickly.

If you like this article or you have suggestions for other type of content, please leave us your feedback.
Finally, you can get in touch by visiting one of our schools or online.