The next stop of our train called “Learning Portuguese” will be at the station of the past time “Pretérito Imperfeito”. This verbal tense will help us talk not about single actions in the past, but about a long period of time and repetitive actions or situations that may have influenced our lives now. 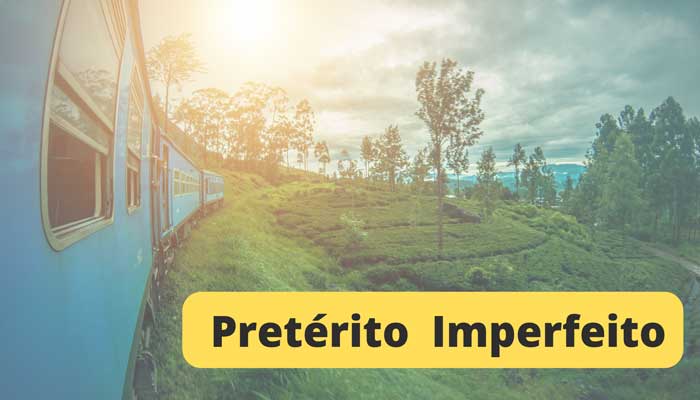 Like any verbal tense, Pretérito Imperfeito (hereinafter referred to as P.I.) has a basic rule and exceptions. To form the form of the verb in this tense, it is traditionally necessary to change the ending of regular verbs. So let’s take a look at the little table below.

Let’s not delay and immediately look at examples.

Ela falava muitas línguas quando trabalhava numa empresa internacional. (She spoke many languages ​​when she worked for an international company.)

Verbs ending in “-er” and “-ir” have the same ending change.

Note that in both tables for the pronoun “nós” a sign appears above the letter “á” and “í“. This is because in Portuguese the stressed syllable is penultimate, and we need to emphasize the desired stressed syllable.

No início da sua careira ele fazia muitos erros. (He made many mistakes early in his career.)

Thus, we emphasize the duration of the action. Similarly, we can describe a continuous state.

Eles não saiam de casa, porque estavam doentes. (They did not leave the house because they were sick.)

Often in sentences that require the use of Pretérito Imperfeito there are adverbs such as: antigamente (before), naquele tempo (at that time), no passado (in the past) and others. It is not necessary to say them every time, but in order to get your bearings, at first you can check whether they are suitable for the thought that you want to express.

We want to make you happy! There are few irregular verbs in this tense, only three. Let’s start in order.

Since the verb “ir” (to go) is exactly the same as the ending of some verbs in the infinitive – “-ir“, its forms exactly repeat the endings for such verbs in Pretérito Imperfeito.

The next irregular verb is “ter“. Its forms are also exclusive, but they must be learned, as we will need them to study another verbal tense in the future.

Note that in the form for the pronoun “nós” for the verbs “ir” and “ter” appears the superscript – “í“. In addition, the form of these forms “ter” must be used when we talk about age in the past.

Eles tinham mais de 50 anos, quando se mudaram para Portugal. (They were over 50 when they moved to Portugal.)

In the second example, you can see how two different past tenses are used in the same sentence. This is because age is considered a continuous state (as many as 365 days a year), and moving is a single, short-term action.

The third irregular verb is “ser“. Its forms will definitely have to be used when we talk about the time on the clock in the past, despite the fact that time moves and changes every second.

As usual, we will apply new knowledge in practice:

Ela era muito simpática antes do seu casamento. (She was very sweet before her marriage.)

This concludes the list of irregular verbs, which means it’s time to start learning when else we can use the Pretérito Imperfeito tense.

Action at the moment

Ela estava a tomar banho, quando ele chegou. (She was taking a bath when he came.)

Eu vi como ela estava a correr pelo parque. (I saw her running in the park.)In this example, it is clear that one action was happening while another was happening.

You can add the word “enquanto” (while), but this is not required. However, if two long actions occur at the same time, such a scheme can be omitted.

Eu lia um livro enquanto a mãe lavava a loiça. (I was reading a book while my mother was washing the dishes.)

O Marco falava pelo telemóvel quando a Joana cozinhava. (Marco was talking on the phone while Joana was cooking.)

With each lesson at our school, your possibilities become more and more limitless. Our teachers, like every person in their profession, know all the nuances and help to avoid energy losses during training. Therefore “poupem tempo e aprendam português connosco“. (Save time and learn Portuguese with us.)